The Happiness Index in Bhutan – Why Happiness matters – Part 2 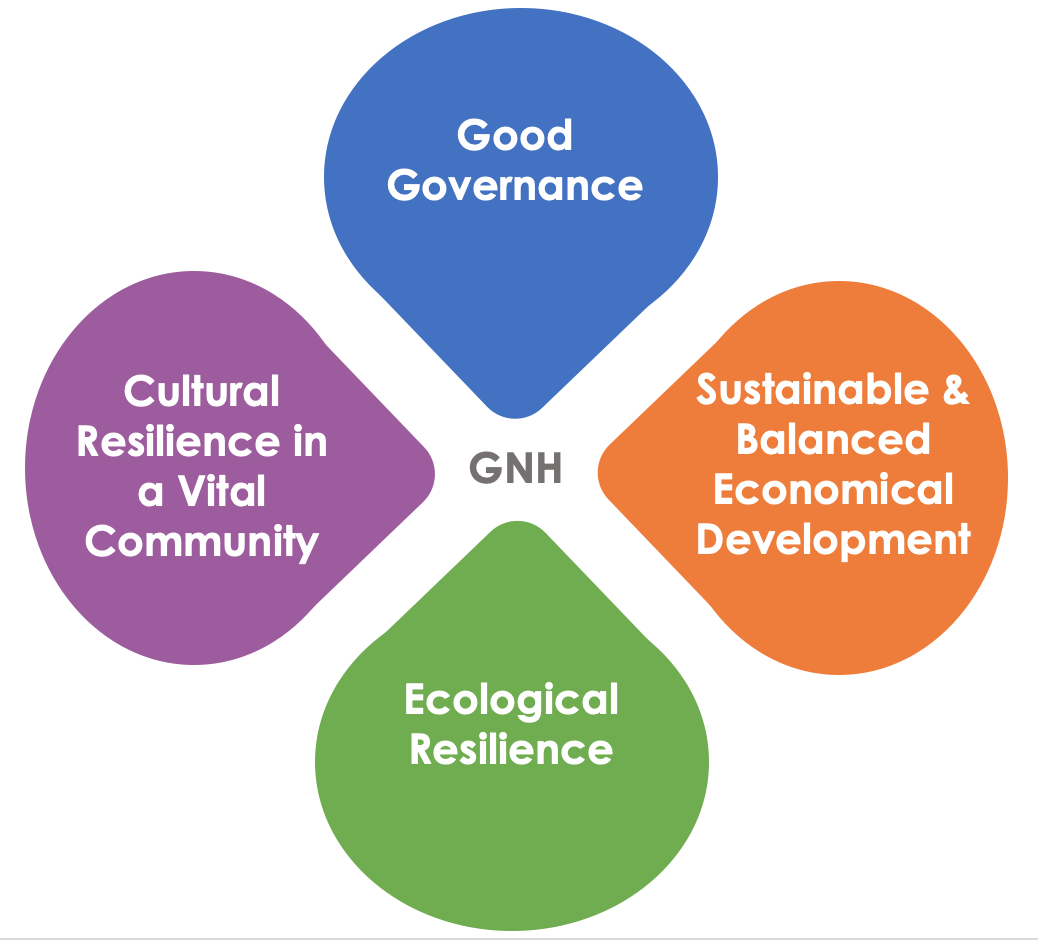 What is this, the Happiness Index in Bhutan?

This post originally appeared as a travel report on the website of the non-profit organization Wisdom Together e.V., for which I accompanied a travel group in Bhutan in March 2020. After our return, we all stumbled from the first lockdown in Bhutan to the closure of all facilities in Germany. On the day of happiness on March 20 2021, I am sharing this travelogue now here on my own blog:

Punakha is a place where two mighty rivers meet - the Female and Male rivers - a popular spot for river rafting. The rivers in Bhutan all have their origins in the Himalaya Mountains reaching out into the great north Indian river arms - and thus generate the country's most important and carbon neutral source of economic income, electricity from hydropower. Bhutan is one of very few countries in the world with a negative carbon footprint: the spread of air polluting industries is rigorously monitored by the GNH Commission. It is also ensured that at least 60% of the forest cover recorded in the 1990s is preserved. A particularly natural experience for us is an extended hike between Punakha and Thimphu, in an enchanted forest of rhododendron trees: on the pass heights just before the tree line, huge tree-high bushes made of gnarled, thickly mossy trunks grow into the foothills of Bhutan. In March / April they transform in a sea of ​​flowers. We are privileged to experience the first flowering perennials.

In a moving TED talk, the former Prime Minister Tshering Tobgay drew attention to the ecological challenges in the Himalayas. Tshering Tobgay: This country isn't just carbon neutral - it's carbon negative
The threat of glacier melting reappeared during the pandemic crisis in January 2021, when a lake of glacial melt water overflowed in the Himalayas and the floods destroyed a dam and settlements in the Bhutanese neighborhood in northern India, claiming numerous lives.

It is the third morning of our trip in Bhutan, when finally our group and the country of Bhutan are experiencing the impact of the corona pandemic: An American tourist is the first patient in the country to test positive in the night of March 5th to 6th . The government, authorities and companies in Bhutan are prepared for this moment. From now on no more tourists come in and the schools are closing. Restaurants and shops will follow soon. Quarantine facilities are ready for immediate use. An impressive experience is the awareness among the people and the loving respect for the government, especially for the 5th king in the country. The locals do their part without grumbling to ensure that remaining tourists stay as comfortable as possible until departure. The entry ban, which will continue until further notice, has an existence-threatening effect on tourism. But what counts, and is also noticeable in the local social media (only 30 years after the introduction of television, the Bhutanese are well connected with Facebook and WeChat): strengthening cohesion, the responsibility of the individual for the entire system. In the remaining days we have two more inspiring conversations on politics and Buddhist spirituality with Norbu Wangchuk (Minister of Education between 2013 and 2018) and Khedrup Rinpoche, a young Buddhist master from Central Bhutan. In both conversations we feel that the people in Bhutan are by no means living in an enchanted “Shangri-La” far away from the crises and turmoil of this world. Deeply shaped by Buddhist values ​​of mindfulness, conscious leadership and love for all beings, one experiences a care and a down-to-earth realism. This attitude contrasts favorably with the chauvinistic power in some neighboring countries of Bhutan. Because of its peaceful culture, its loyalty to the king and centuries-old traditions and unmolested from any colonial influence in the past, Bhutan is often referred to as the Switzerland of Asia.

The central theme of the spiritual mask dances in Bhutan is the Tibetan Book of the Dead - the Bardo Thödol. “Bardo” describes the state between death and rebirth, which according to Buddhist teachings lasts 49 days. In the 30 days since our return from Bhutan, the entire world has come to a standstill and we are all in an intermediate state - which also coincides with the Easter Lent in Christianity. I hope that we will learn from the spiritually deeply rooted human resilience of this small country high up in the Himalayas when the mists of the corona pandemic lift.

The government in Bhutan with the king's omnipresent care, has so far managed the effects of the pandemic in a prudent way: most facilities except for schools were able to reopen in April 2020 and social life remained largely undisturbed until late summer. The government has provided extensive quarantine and isolation accommodation, especially for Bhutanese living abroad (students and guest workers) who have returned from Australia, Thailand, India, the United States and the Middle East with governmental support. It was not until August and then again in December 2020 that the infection rate rose worryingly and led to extensive waves of lockdowns with tight curfews. The situation has been more relaxed again since February 2021 and kids have finally returned to school. In January 2021, the first and so far only death related to the disease from the Covid-19 virus was registered.

When the 5th King took office in 2008, he established a troop of voluntary civil protection: In the event of a disaster this troop ensures the infrastructure for health and civil security and supplies for the population even in the most remote mountain valleys. The engagement in this troop currently provides courage and purpose for many men and women with no source of income, particularly from the paralyzed tourism business to stand up for the community. From India, Bhutan was supplied with a first batch of 100,000 vaccine doses and the government is planning to roll out a mass vaccination in spring from the end of March. When tourism will also arrive in the "new normal" is currently difficult to estimate due to the global situation.

More about the amazing culture of conscious leadership from an American journalist who traveled in Bhutan in 2018 guided by the sister of my partner as travel guide.

A trip to Bhutan needs to be carefully planned. Do you want to feed your dream to travel to a country with a unique culture, joie de vivre, deeply rooted spirituality and breathtaking nature? You are invited to contact me, with the subject "Bhutan trip"!